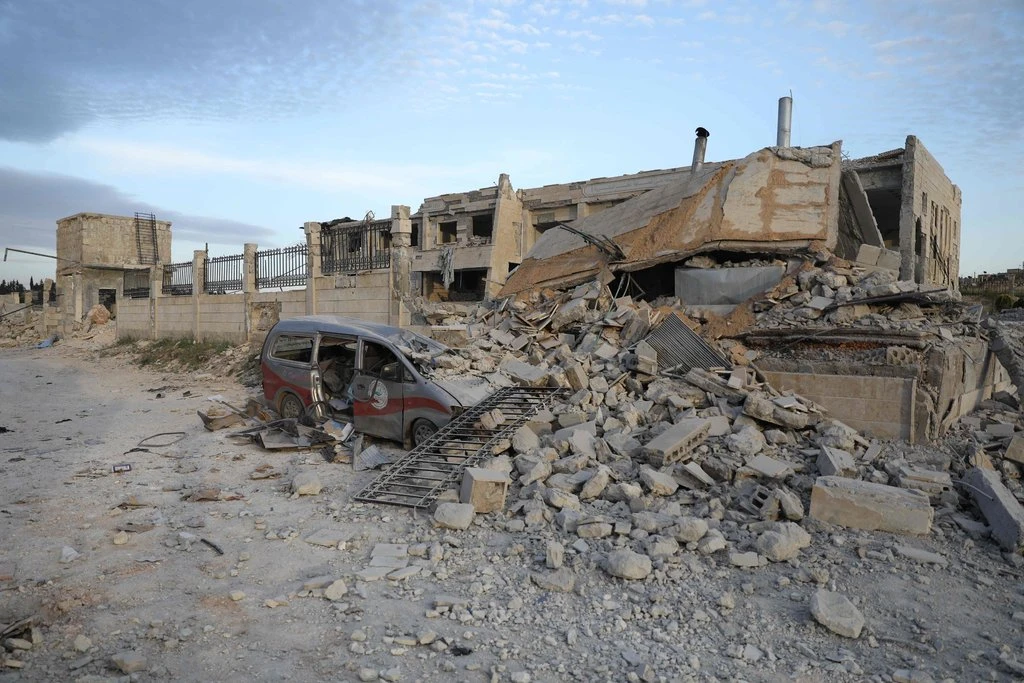 The New York Times piece was based on multiple pieces of evidence:  a collection of Russian Air Force audio recordings obtained by The Times, social media posts from Syria on the day of the bombings, interviews with eyewitnesses, and records of humanitarian organizations supporting the four hospitals.  What is striking in the report is the analysis of the evidence and its use of multiple sources to confirm who perpetrated the bombing, as well as how plainly the evidence is laid out both in the written report and the accompanying video about the bombing of hospitals in northern Syria in May 2019.

This report immediately reminded me of the area where I lived most of my life.  Most of these neighborhoods have become blocks of ruin, and practically devoid of inhabitants as a result of the continuous shelling of Idlib, which displaced around 450,000 people between April and July 2019, according to MSF.  Hundreds of thousands of displaced people live in appalling and unhealthy conditions.  Many shelters, overcrowded and lacking sufficient infrastructure, have become a breeding ground for diseases.  The situation has been made worse by the fact that most of the region’s health and civil defense infrastructure has been taken out of service by regime forces’ relentless attacks. Within half a day or less between May 5 and 6, 2019, bomb attacks took four hospitals out of service. The apparent deliberate targeting of Hospitals by the Assad regime and Russia resulted in a vast shortage of emergency medical care at a very critical time, intensifying the urgent need for immediate aid.

The four sequential precision strikes on May 5 and 6 targeted the Kafr-Nabl Surgical Hospital, killing one person and forcing the staff to evacuate.  Observers recorded video of a Russian aircraft flying in the area at the time of the strike, while another recording from the Russian Air Force, a pilot reported that he had “carried out” his target at 5:30 pm, the same time as the raid.  The pilot then reported three subsequent bombings about five minutes apart, which corresponds with the chronology recalled by a doctor present in the hospital during the attacks.

While watching the video accompanying the report, my feelings quickly shifted between annoyance, sadness, and anxiety.  The mixture of these emotions is hard to describe as I watched all those towns become piles of rubble stained with the blood of their inhabitants.  These barbaric bombing campaigns have forced people to move directly and indiscriminately, including my family, my relatives, the people of my town, my neighbors, and inhabitants of all the neighboring villages; all have been dispersed to random places, in search of safety and shelter.

The four bombed hospitals served civilian residents and were located far from any military positions, but that was not sufficient to save them from the regime's targeting. In the video report, I have recognized the voice of a witness, a doctor describing some of what he experienced that corresponded with what the pilots' said in the Russian Air Force recordings. The doctor was my high school classmate who chose not emigrate because of the shortage of doctors. He wanted to serve the people even if could it cost him his life.

The report clearly documents crimes committed against civilian noncombatants. The moment I finished reading the report, I instinctively thought it provided a definitive guide to condemning Russia and the Assad regime.  But then I remembered that while there are already mounds concrete evidence, thus far nothing has been done to permanently stop the crimes and brutal bombardment.  International silence and willful ignorance of the humanitarian catastrophe resulting from the continued indiscriminate targeting of inhabitants in northern Syria has become the status quo.

While the world continues to ignore the tragedy of four million people under siege in Idlib, the Turkish-led operation “Peace Spring” has sparked demonstrations across Europe and elsewhere and international condemnation.  The operation, which has targeted the Kurd-led Syrian Democratic Forces in the area between Tal Abyad and Ras al-Ayn, has caused the death and injury of hundreds of civilians and the displaced as many as 300,000 residents whose ability to return remains in doubt.  The widespread solidarity and renewed attention proves that many countries and human rights organizations are not ignoring what is happening in Syria and should be viewed as a positive show of support.

I am nonetheless forced to ask myself about the contradiction between recent outrage over the Turkish operation and the lack of outrage and attention to the ongoing plight of Syrian civilians indiscriminately targeted by the regime and its allies.  While nations, the press, and social media are buzzing about operation “Peace Spring” and the resultant crisis in Syria’s (north) east, heavy shelling, sometimes augmented by air raids in the southern countryside of Idlib have occurred daily for more than half a year.  Perhaps in the international community undervalues the displaced people in Idlib or has simply tired of hearing about them.  Sadly, while Peace Spring has grabbed the international spotlight over the past several weeks, the regime’s shelling and bombing of Idlib has intensified, increasing number of victims killed, injured, or displaced.

The outcome of Peace Spring is as yet unknown, but the consequences thus far are tragic and worthy of the international outcry and condemnation.  Still, I must ask: why was six months of continuous shelling that killed dozens and forced hundreds of thousands into homelessness not sufficient to spark outrage?  Was it not enough to see civilians in Idlib facing their unknown fate alone, in silence, and in front of the gaze of the whole world?  Or, after eight years, had the world simply lost interest in the Syrian conflict?