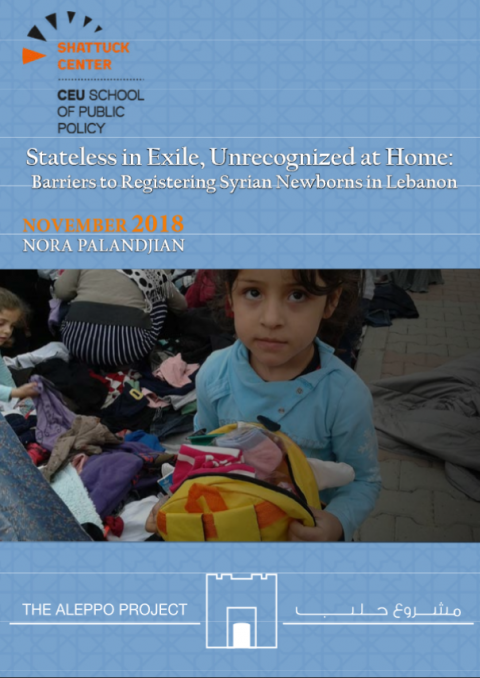 Offspring of Syrian refugees in Lebanon are at a heightened risk of statelessness due to barriers they face in the process of birth registration. A series of 2015 changes in residency renewal requirements and the discontinuation of the United Nations Refugee Agency (UNHCR) registration directly led to this increased risk among Syrian refugee children. While already part of a generation with protracted refugee status, children who do not get registered will face a lifetime of challenges accessing basic human rights, protections, and services.

The right to nationality is particularly important considering the facilitation of future return to Syria. Likewise, addressing the issue of Syrian children at risk of being stateless is relevant to a larger campaign launched by the UNHCR to eliminate statelessness within 10 years. The following paper highlights these motivations and outlines the various barriers to birth registration for Syrian refugees in Lebanon. In particular, the paper addresses those barriers attributed to the relevant costs, prohibitive for a population that is primarily living under the poverty line, as well as risks associated with parents’ irregular status. In addition, it will analyze the barriers with international human rights standards, focusing on violations of the International Covenant on Civil and Political Rights (ICCPR) as well as the Convention on the Rights of the Child and considering the relevant actions outlined in the UNHCR plan to eliminate statelessness. Upon providing a successful case study of a large-scale effort to register Syrian refugee births in Jordan, the paper will conclude with a series of recommendations modeled after the protection-sensitive, human rights-based, and cooperative approach applied in Jordan.

This paper was presented at the fourth Lemkin Reunion, held in February 2018 and organized by the Shattuck Center at the School of Public Policy, Central European University in Budapest.