CCNR Panel Explores the Refugee Crisis from a Syrian Perspective 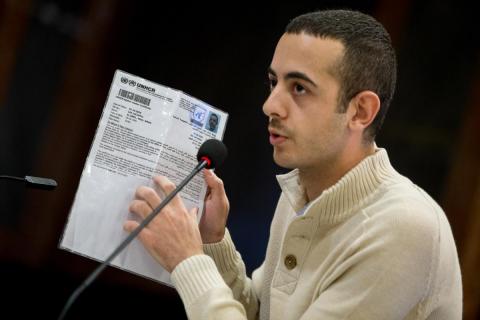 Like millions of other Syrians, refugee Maan Abu Layla fled Syria to escape the violence in his country – especially the barrel bomb attacks from the Assad regime, but also the violence and restrictions that are a part of life in ISIS-controlled areas of the country.

Abu Layla, who is a university graduate, described fleeing Syria in 2013 and later Jordan in 2015 – both harrowing experiences requiring long drives in unreliable and dangerously overcrowded cars; bitterly cold nights spent outdoors; and enormous uncertainty. Abu Layla said he decided to turn himself in to Hungarian authorities “to keep my humanity.” Although he has requested asylum in Hungary, Abu Layla is eager to be reunited with his family who have been scattered by the war and now live in Syria, France, and Jordan. He is also eager to help rebuild his country after the war ends. “Syria will need people like me when the war ends,” he says.  Until then, his main goal is to continue his studies in Hungary.

Abu Layla was one of four Syrians who shared their perspectives of the refugee crisis. They provided valuable and rare insights shedding light on the situation in Syria, the reasons that so many Syrians have left their country, and ways in which the crisis might be resolved. 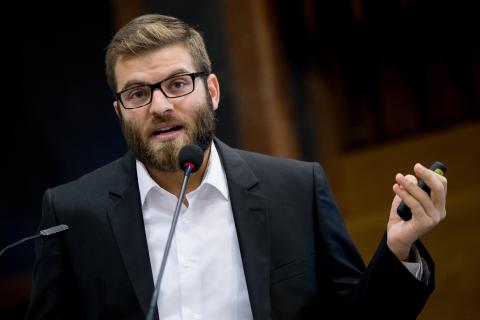 AlHakam Shaar is another Syrian who dreams of returning to his country. He is also a research fellow at CCNR. In his presentation, he cited statistics from a recent survey that the Berlin Social Science Center (WZB) conducted of 900 Syrian refugees currently living in camps in Germany showing that 64.5 percent had left Syria in 2015. Almost all of them (89 percent) had lived in areas of Syria that had been shelled; 73 percent felt personally threatened by barrel bombs. Shaar commented that this data and other surveys as well demonstrate that it was fear for their personal safety that was the overwhelming reason why people fled Syria.

The uprising in Syria broke out in 2011. It was mainly peaceful for the first six months. Gradually, however, the regime responded more violently. Shaar noted that there were “thousands” of YouTube videos documenting incidents when the Syrian army attacked peaceful demonstrators. The regime also began to portray the demonstrations as a “sectarian conspiracy.” Shaar explained that there were sectarian problems in Syria and had been for some time. Historically, however, most of the tension had been focused on the small minority of Alawites who controlled the military, many sectors of the economy, and other groups in Syria. These sectarian differences among Syrians have been exacerbated in recent years – primarily due to efforts by the regime to sow discord among different opposition groups.

Turning his attention to the current situation, Shaar said that weapons and foreigners are “flooding into Syria” in support of both sides. He noted that it was the bombing from the air that was particularly devastating, and caused so many people to fear for their personal safety. It was this fear and also a desire to avoid being conscripted into the army that were the primary reasons young men left Syria.

Shaar then focused on the situation in Turkey where two million refugees now live, and where Shaar himself lived for many years. The vast majority of Syrian refugees who are in Turkey today are forced to work in the black market where they are paid very little, live in cramped quarters, and “have no prospects for the future.” 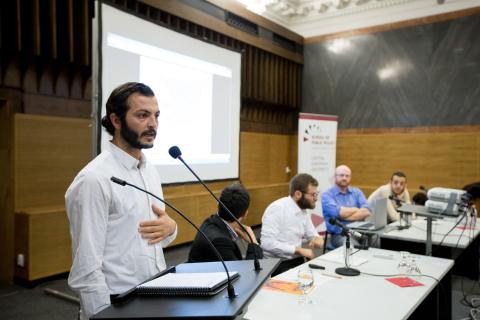 In his remarks, MPA student Yahya Al-Abdullah, spoke about life in Syria under ISIS. He noted that the members of ISIS identify themselves as Muslims but that they do not represent Islam or the Muslim people. Al-Abdullah went on to say that it’s a particular millenarian group within ISIS that is responsible for most of the violence. “They think the end of the world is coming,” said Al-Abdullah, “and that it is their duty to fight anyone who they oppose.”

Al-Abdullah said that the people fighting for ISIS today come from all over the world, and that the leading figures in the organization are not Syrian. Quite the contrary – the Syrians, said Al-Abdullah, are “at the bottom of the pyramid.” The priority of ISIS today is not to overthrow the current regime of Bashar al-Assad but to build an Islamic structure in the liberated areas. Al-Abdullah cited the massacre in August 2014 when ISIS fighters killed members of the Shu’aytat tribe in Deir ez-Zor to keep them from affiliating with al-Nusra as a particularly compelling example of the lengths that ISIS was prepared to go in support of this strategy.

Addressing the question of why people were leaving Syria, Al-Abdullah noted that almost as many people are leaving to escape ISIS as the Assad regime. ISIS terrorizes people, said Al-Abdullah. “Their attitude is, ‘if you’re not with us, you’re against us,’” he said. Al-Abdullah told the story of a friend, a surgeon who is now living in Germany. He fled a town east of Aleppo that was controlled by ISIS after living through “six months of hell” to regain control of his life. Al-Abdullah said that the people at Keleti train station too were “running away for a better life, running away for freedom.”

Al-Abdullah said that he was scared that ISIS was gaining the trust of many Syrians who are still living in the country. Because ISIS is fighting many of the groups that oppose the Assad regime, ISIS-controlled areas are attacked much less often by the regime and by Russia. As a result many people residing in ISIS-controlled areas, said Al-Abdullah, “are under the illusion of being safe.” ISIS is conducting sophisticated campaigns to brainwash children – children who will soon grow up to become ISIS fighters. 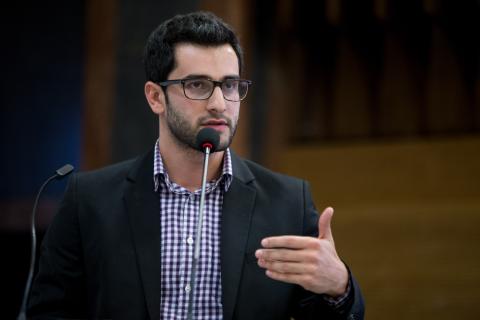 In his presentation Armenak Tokmajyan offered a theoretical framework that he hoped would make it easier to understand the situation in Syria, and to think about a solution. He said there were at least three types of wars taking place in Syria today: between ISIS and the Kurds; between the regime and the armed opposition; and between the international coalition and ISIS and Al-Qaida affiliates. Tokmajyan said that the core conflict, which he described as an “internationalized civil war,” was the one between the regime and the armed opposition. “This is the one we should focus on.”

Tokmajyan said that the US’s focus on ISIS was a problem. “The US does not have a strategy to solve the core conflict,” he said. All attempts to resolve the Syrian conflict to date have failed. What has not been tried though is to impose a solution. Tokmajyan said that the solution must come from the top, and will require cooperation first between the US and Russia, and then between them and the primary regional actors (Iran, Turkey, and Saudi Arabia), and – finally – with the “war lords” on both sides. “I say this with a broken heart,” said Tokmajyan, “but the Syrian actors don’t have much say. They are all so dependent on outside actors.” 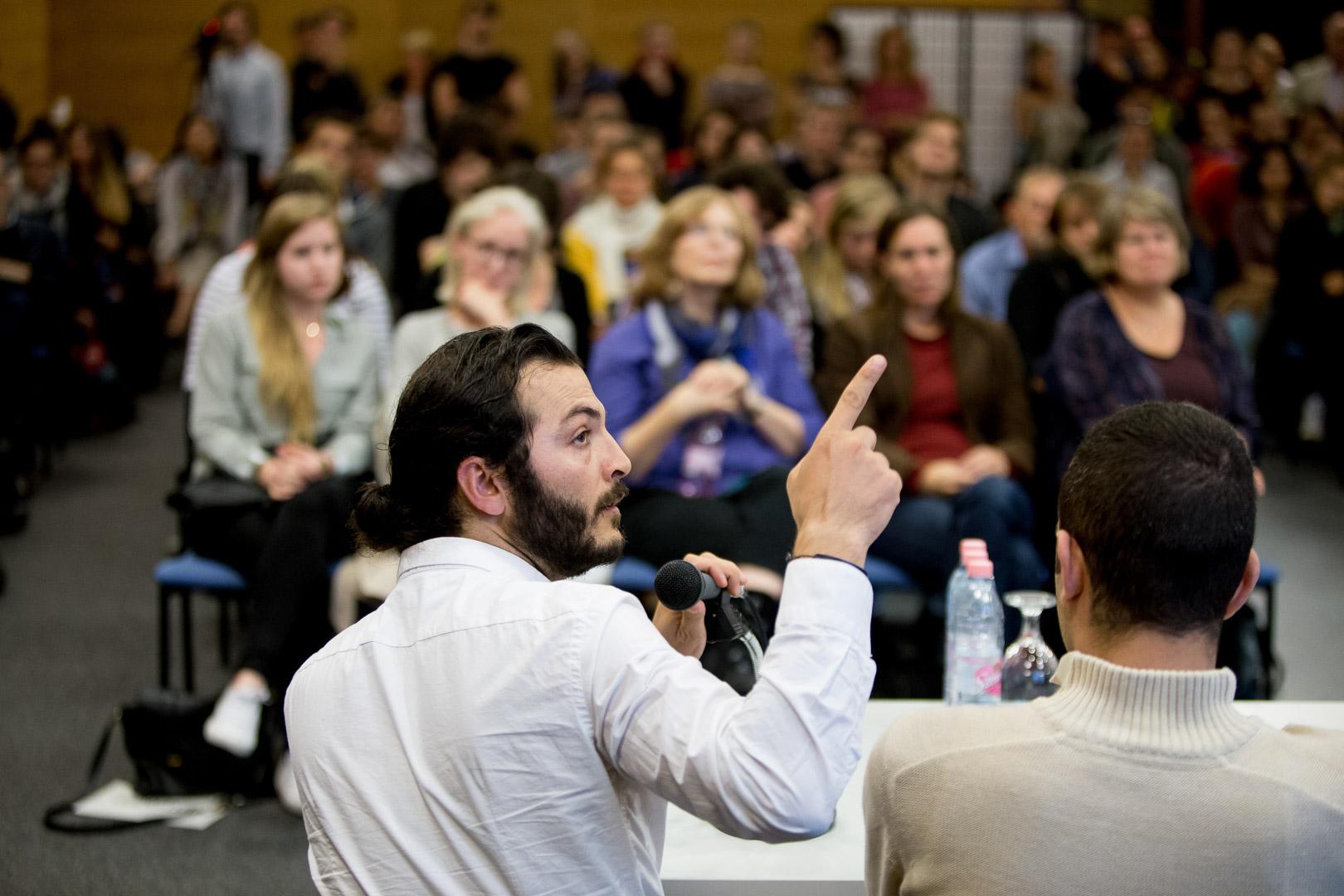 Watch the full panel discussion below.

The panel discussion took place on October 7. It is part of CCNR’s Aleppo Project, an open collaboration among stakeholders to identify policy tools and ideas that will be helpful for the people of Aleppo when they rebuild their city when the war ends. The Aleppo Project website will be launched on October 20.