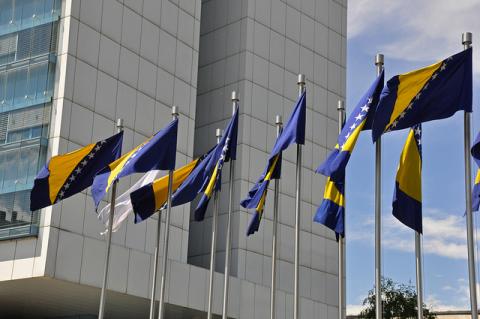 On April 17, the Center for Conflict, Negotiation and Recovery (CCNR), the School of Public Policy (SPP), and the Center for EU Enlargement Studies (CENS) at Central European University (CEU) hosted a one-day, student-organized international youth conference on the role of youth in Bosnia and Herzegovina's transition 20 years after the signing of the Dayton Agreement. Participants from the region included youth activists, journalists, NGO founders, academics, and government officials.

"The process of change and transition is a long and arduous road on which many countries like Bosnia and Herzegovina find themselves," SPP Founding Dean Wolfgang H. Reinicke noted in his welcoming remarks.

His Excellency Zeljko Janjetovic, Ambassador of Bosnia and Herzegovina to Hungary, emphasized that "the country deserves a better life after war." He highlighted the importance of this conference topic, saying, "Young people should have the resources to fight for their own future, rights, and influence on political decisions because they will lead Bosnia and Herzegovina one day, and that won't be easy."

During the conference, panelists led discussions on the influence of the current constitution in Bosnia and Herzegovina, economic development over the past 20 years, and the relevance of civil society in the country.

Panelists agreed that the current constitution of Bosnia and Herzegovina has limitations. One panelist noted the lack of direct democracy. Previous protests have demonstrated a willingness to participate in politics, which the panelists suggested implies the potential for change towards a direct democracy under a revised constitution. Youth can engage in this process, a panelist argued, by working with political parties and collaborating across parties.

At the same time, panelists also questioned whether constitutional changes should be a priority for Bosnia and Herzegovina given the many other issues facing the country. It could be that a bottom-up approach rather than a top-down approach spearheaded by constitutional changes could help the country tackle current challenges and create change quickly, suggested one panelist.

Discussing economic problems in Bosnia and Herzegovina, panelists highlighted the high youth unemployment rate, a mismatch between education and the labor market, the lack of foreign investment, corruption, and unfavorable business and tax laws. Panelists argued that youth must take an active role in improving economic development in the country. They urged youth to act as change makers by placing pressure on decision makers to introduce new labor policies.

In the final panel on civil society in Bosnia and Herzegovina, panelists explained the lack of coordination among civil society organizations (CSOs). CSOs focused intensely on Sarejevo and should now concentrate on smaller localities, argued one panelist. "Communication needs to be improved between the government and civil society as well as between NGOs and between NGOs and the public," emphasized Hana Semanic, CENS research assistant.

Another panelist highlighted the successes that numerous grassroots organizations have achieved. Youth can make real change if they organize locally, the panelists urged, and this ability to create change is evidence of how the younger generation can be involved in local, regional, and even national decision making processes.

"To prevent frozen conflicts and economic stagnation, you have to change the frozen policies on the ground," noted CEU President and Rector John Shattuck in his closing remarks.

"This conference was a unique opportunity to bring together young activists from Bosnia and Herzegovina as well as from Central Europe," said student co-organizer Radka Pudilova (MPA '15). "We all took away a few key messages about how we as youth can create change in our own society," fellow co-organizer Dragana Marinkovic (MPA '15) added.