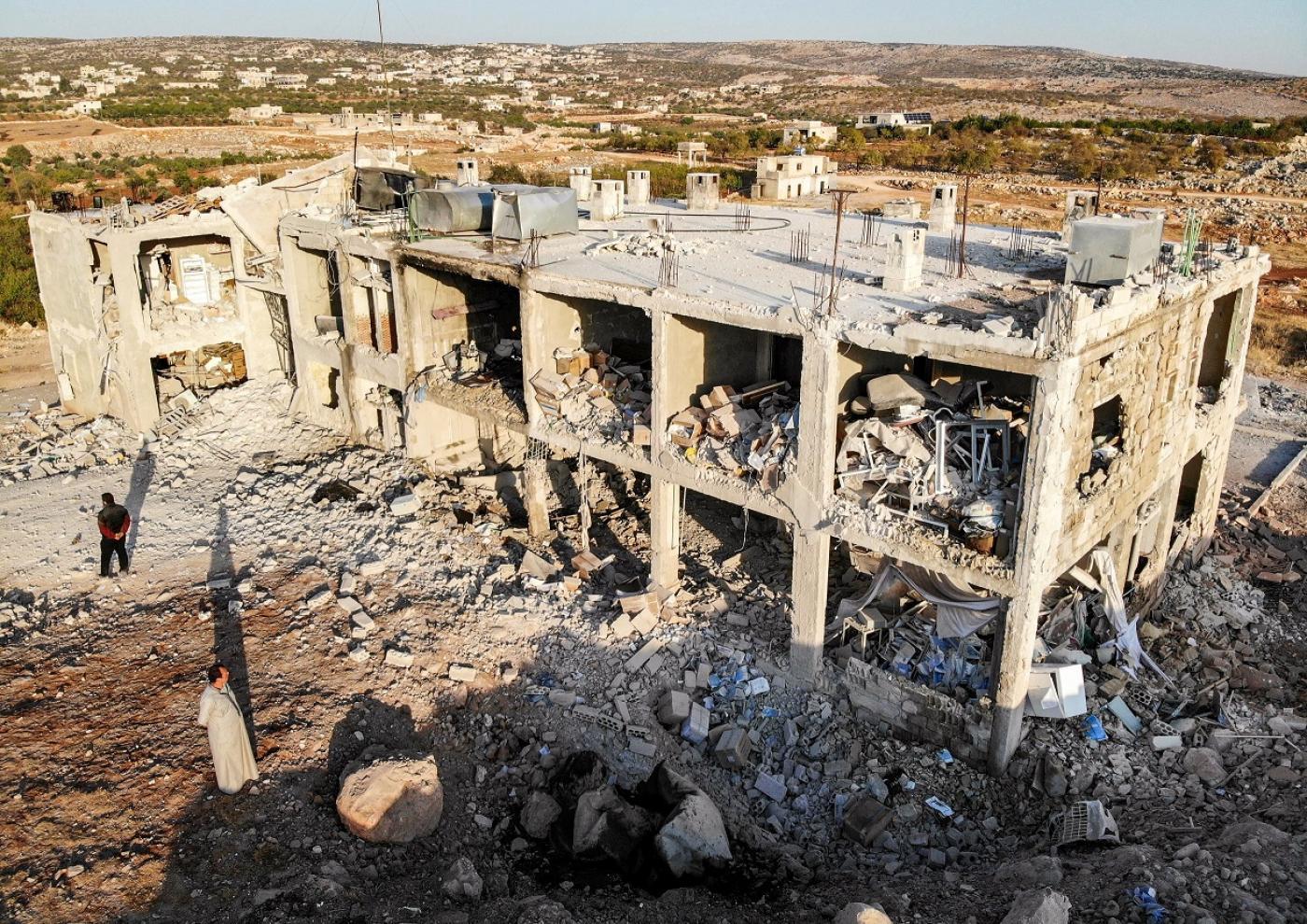 An aerial view of Al-Ikhlas Hospital taken on 6 November after it was reportedly hit in an air strike in the Syrian village of Shinan, Idlib. (AFP)

The Aleppo Project has recently blogged about the multiple hospital bombing attacks that New York Times investigations proved were perpetrated by the Russian Air Force in rebel-held Idlib on at least two separate occasions this year.  A December 1 New York Times report linked Russian warplanes to attacks on civilian targets in Idlib on July 22 and August 16 that together killed 39 people and injured dozens more.  Far from being isolated incidents, the bombing and shelling of hospitals, health facilities, and clearly civilian areas, overwhelmingly perpetrated by the Assad regime and the Russian military acting on the regime’s behalf nationwide is an all too common feature of Syria’s long running conflict.  The fact that the international treaties that comprise the “law of war” explicitly prohibit attacks on hospitals, other safety zones, and civilians appears to have provided little deterrence.  On the contrary, the frequency with which the Assad regime attacks medical facilities and civilian targets demonstrates that the practice is in fact integral to its military strategy.  Through its legally questionable tactics that explicitly target civilians, the regime aims to break the will of the people and render rebel-controlled areas as ungovernable as possible.  Having achieved control of Aleppo in 2016 through similar tactics, it should surprise no one that the Assad regime returned to the same playbook in Idlib.  Nor should it surprise anyone if Idlib’s fate, once the regime regains control of it, resembles that of Aleppo.

Most Medical Facility Attacks Attributed to Assad Regime and Russia

While, hospitals have been damaged by virtually all parties since the Syrian conflict began in 2011, credible research attributes 90 percent of the attacks to the Syrian government and its allies.  Hospital bombings by pro-government forces have become so common that the topic “Russian-Syrian Hospital Bombing Campaign” has its own Wikipedia page.  Physicians for Human Rights (PHR), which has painstakingly mapped hospital attacks throughout the conflict, documented 583 attacks on at least 350 separate medical facilities between March 2011 and September 2019, killing 912 medical personnel.  PHR found 525 of the attacks to have been perpetrated by Syrian government forces (301) or the Russian military (224).  PHR’s research attributed 34 attacks to various non-state groups, including ten by ISIS, three by the Free Syrian Army (FSA), and 13 by unidentified antigovernment forces.  PHR also found international coalition forces responsible the bombing of four health facilities.  PHR could not definitively assign blame for 20 attacks.

Northwest Syria’s Idlib Province, one of the last rebel-held areas of the country, has spent most of 2019 under direct assault from Syrian government and Russian forces.  In a grinding offensive that began in April, pro-Syrian government forces have relentlessly bombarded Idlib almost daily through artillery shelling and aerial bombing, and little by little, are expanding the territory they control.  According to the Office of the United Nations High Commissioner for Human Rights (OHCHR), health facilities in Idlib were bombed 61 times between April 29 and November 6, 2019, including the May 5-6 and November 6 attacks by the Russian Air Force.  Besides the high profile July and August attacks mentioned in the first paragraph, a November 20 missile attack on a displaced persons camp in Qah, Idlib province, killed 12 people and damaged a maternity hospital.  According to OHCHR, 1,089 civilians were killed in northwest Syria (Idlib and Hama provinces) between April 19 and August 29 of this year.

2016 Report: Hospitals So Likely to be Attacked That Militants Avoid Locating Near Them

By targeting hospitals in Idlib, the Assad regime is adhering to the strategy that has yielded results in previous campaigns, for example in Aleppo.  As with earlier attacks, there is scant evidence that the facilities bombed by the regime constitute legitimate military targets.  A November 2016 appeal by the Women’s International League for Peace and Freedom (WILPF) called a (any) hospital in Aleppo the “most dangerous place in the world,” noting that at the time a hospital in Syria was attacked every 17 hours with a health worker killed every 63 hours.

Doctors Without Borders’ (MSF) analysis of the April 2016 bombing of Aleppo’s Al Quds hospital that killed at least 55 noted that the attack appeared timed to maximize casualties as the hospital was treating more patients than usual following a series of earlier bombings.  The destructive attack closed the hospital for 20 days, and even when it did reopen, the damage it sustained combined with staff it lost to the attack prevented it from returning to anywhere near full capacity.  MSF noted that despite being located in a rebel-held area, Al Quds and other Aleppo hospitals not only had demonstrated their independence, but had been targeted violently at times by anti-regime militants.  According to MSF, the lone armed group that had occupied a building 500 meters from the hospital in 2015 “left the area out of concern for its vulnerability to attack because of its proximity to Al Quds hospital and, paradoxically, not the other way around.”  The report continued, “…hospital staff reported that it is common practice for armed groups not to occupy buildings close to hospitals because they expect to experience collateral damage from attacks.”  MSF added that civilians frequently pressured medical facilities to not locate within residential areas specifically due to fears of attacks.

When the “Do Not Bomb” List Fails to Protect Facilities

As the New York Times reported, the four hospitals bombed on May 5 and 6 this year appeared on a deconfliction list provided by the UN Office for the Coordination of Humanitarian Assistance (OCHA) to all parties in the conflict (Syrian government, Russia, opposition, coalition) for the express purpose of preventing attacks on medical facilities.  Noting in May that at least six Idlib hospitals on the list had been bombed this year, the director of Idlib’s health directorate characterized the attacks as “systemic.”  Meanwhile, Russia, now proven to be a primary perpetrator of the attacks, is using its position as a permanent member of the UN Security Council to limit the scope of UN investigations into the bombings, block the release of the investigation’s findings, and discredit results as disinformation.  While well intentioned, OCHA’s deconfliction list appears to have been an abject failure that may have unintentially made the hospitals more vulnerable.

Indiscriminate Violence and Deliberate Denial of Safety, Security, and Infrastructure by Design

Even when executed with exacting precision so as to minimize noncombatant casualties, war unleashes destructive, deadly consequences on civilians.  Since the beginning of this nearly nine-year conflict, it has been clear that the Syrian government is taking no such precautions.  It stretches credulity to suggest that the Assad regime and its allies’ 525 attacks on health facilities and hundreds more against other civilian targets and population centers throughout the conflict could be anything besides a coordinated and calculated strategy.

A 2019 Global Public Policy Institute (GPPi) report by Tobias Schneider and Teresa Lütkefend dubbed the regime’s use of indiscriminate violence against rebel strongholds, the “Damascus School of Counterinsurgency.”  Like the regime’s repeated use of chemical weapons, the gratuitous bombing of medical facilities and other civilian targets aims to inflict such pain and fear on inhabitants of rebel-held areas that they lose the will to resist, reject the rule of rebel authorities, and in many cases, flee the area altogether.  Unlike chemical weapons attacks that account for a fraction of the deaths caused by conventional weapons, deliberate conventional attacks on civilians, after nearly nine years, no longer spark anything beyond perfunctory condemnation and admonition.

Will “Normalization” of the Assad Government Mean It Escapes Accountability, Consequences?

With the Assad regime’s hold over Syria appearing to stabilize, and its eventual control of current rebel-held territories looking increasingly likely, some nations are inching toward normalizing relations, at least to some extent.  At the same time, documentary evidence continues to dispel any notion that the regime’s Russia-abetted, violent “collective punishment” of civilians for the “crime” of residing in rebel-held territory, so far resulting in hundreds of thousands of deaths and millions displaced, is anything but a deliberate strategy.  The fact that the regime has faced few tangible consequences for this approach is likely as responsible for the strategy’s continuation as its military effectiveness.

While few objective observers have ever disputed that the Syrian government and Russia were purposely targeting civilians, hard evidence increasingly removes any doubt.  Intentionally targeting and terrorizing civilians, be it with chemical or conventional weapons, and the targeting of medical facilities are fundamental breaches of the rules of war.  Winning the war or having a Security Council permanent member as an accomplice should not shield the perpetrator from accountability for such crimes.