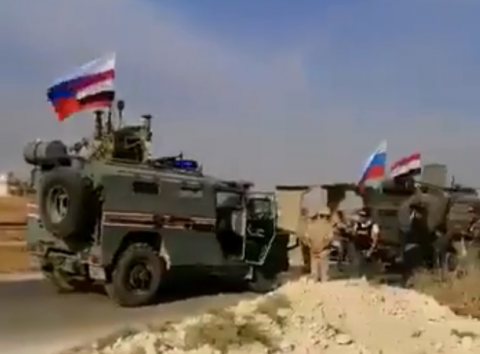 Just over a week in, Turkey’s continuing incursion into Northern Syria has precipitated significant changes on multiple fronts.  According to the United Nations Office for the Coordination of Humanitarian Affairs (OCHA), as of October 14 the fighting has forced up to 300,000 to flee their homes and resulted in the deaths of at least 70 civilians and more than 200 combatants – numbers that are certain to grow.  Instances of summary executions of combatants, unarmed civilians, and at least one local politician by Turkish forces or their allies in the rebel Syrian National Army (SNA) have been reported.  In response to Turkey’s operation, the Kurdish-led Syrian Democratic Forces (SDF), which has autonomously administered much of Northern Syria, redeployed the bulk of its forces to the border regions targeted by Turkey.  One consequence of this move appears to be the escape of up to 1,000 ISIS-related detainees (family members and fighters) from an SDF administered prison and camp.

A Marriage of Convenience, Survival, and Concession

Faced with Turkey’s overwhelming military advantage, the SDF agreed on October 13 to a Russian-brokered security arrangement with the Syrian government under which Syrian army units together with Russian forces and military contractors are deploying to SDF-administered territory in Northern Syria, ostensibly to help the SDF hold off Turkish and SNA forces.  SDF leader General Mazloum Abdi said that while he did not trust the regime of Bashar al-Assad, he believed aligning with the Syrian government and Russia would save lives in the short term and characterized the decision as choosing compromise over genocide.  With the return of its forces to the country’s Northeastern region, the regime of Bashar al-Assad has retaken control (or at least share of control) of up to a third of Syrian territory that it had not held for seven years.  By October 14, forces loyal to the Assad regime had already taken up positions throughout the North, and for the most part, have avoided confrontation with Turkey.

Staring down the Turkish onslaught and no longer able to count on American support, the SDF held few bargaining chips and likely conceded a lot to the Syrian government in exchange for security.  While the Assad regime will retake huge swaths of territory, including several rich in oil and gas, without having to wage a costly military campaign, the SDF and Kurds have likely sacrificed the autonomy that, just weeks ago, showed the promise of the SDF region developing into Syria’s most secure, diverse, and tolerant.  Although the Assad regime may allow some degree of cultural autonomy and achieving complete administrative control could take time, it is unlikely to tolerate self-government in the long run.

While some have suggested the SDF-Assad deal could put Syrian government forces on a collision course with the Turkish military and the SNA, the scenario seems unlikely for a number of reasons.  First of all, Russia is likely to use its close relations with both the Syrian government and Turkey to coordinate between the two sides to broker deals that avoid direct military engagement.  For example, in December 2016, Russia coordinated a ceasefire that returned control of eastern Aleppo to the Assad regime.  The deal also evicted the remaining 34,000 residents (including activists, city council members, rebels, and their families) from the city.  Second, despite being on opposing sides during several previous Turkish military operations, the regime and Turkish-backed forces have largely avoided directly engaging one another with a few notable exceptions.  Despite extensively bombing Idlib since late 2011, Syrian government attacks never targeted the Turkish-trained and supported rebels installed following Turkey’s operations “Euphrates Shield” and “Olive Branch.”  Similarly, the Assad regime similarly avoided engaging Turkish-backed rebel units in Jarablus, al-Bab, and Marea.  In Idlib, Russia facilitated de-escalation zones agreed upon by Turkey and the Syrian government in which both sides had observation points near the front lines.  When the regime bombed and subsequently advanced to several towns in the region that fell within Turkey’s line of observation, Turkey put up little resistance.  Third, during the current operation, Turkey has conspicuously avoided entering several areas in which the Assad regime had a presence, for example Qamishli, despite its border location within Turkey’s so-called “safe zone.”  Furthermore, the pockets of regime forces in the north, for example in Hasakah and Tell Rifaat (as well as Qamishli) have demonstrated little concern over the Turkish operation, suggesting they do not believe they will be targeted.

One recent example of Russian-Turkish de-escalation occurred in the contested town of Manbij.  On October 14, Manbij appeared to be facing a direct Turkish attack.  By October 15, however, the Syrian army, had taken control of the town with Russian and Syrian aircraft controlling the sky amid reports that Russian jets fired upon Turkish-backed rebels in the area.  By October 16, Russia and Turkey were reported to have negotiated a buffer between Syrian and Turkish-backed forces, while the Russian military took over the former U.S. military outpost in Manbij.

Moscow’s close relations with both Damascus and Ankara hold out at least the possibility that the three sides anticipated precisely the current scenario.  While the specifics of the Assad-SDF agreement remain largely unknown, at least one report suggests a significant level of detail.  Given that the U.S. withdrawal and Turkish operation were floated in December 2018, it is not inconceivable that the deal developed over the long term as opposed to hastily over a weekend.

Inhabitants Likely to Lose the Most

As SDF’s General Mazloum Abdi stated, the SDF-Syria-Russia agreement, by reducing the level of armed conflict, could prevent significant loss of life in the conflict.  In the near term, it also may reduce the prospect of further mass displacement of Northern Syrian residents and the humanitarian disaster typically associated with such an upheaval.  Nonetheless, the return of the Assad regime to Northern Syria and the likelihood that at least some of regions will switch from SDF control to that of the Turkish-backed SNA are certain to result in more displacement.  Kurds and others associated with the SDF would be prime targets for persecution and reprisals in SNA-held areas, while those associated with the Americans or implicated in any rebel or anti-Assad activity as well as activists and politicians have strong reasons to fear the regime’s return to control of the region.  While it could take time for the Syrian government to fully assert its administrative hand, once it does, there is no reason to expect its method of governance to differ from the mass repression and violence it employs elsewhere in Syria and has wantonly used against all opponents since the uprising began in 2011.